CloudFlare’s Matthew Prince Challenges Amazon for Control of the Net

Amazon wants to own every layer of business internet services. Prince joins Baidu, Google, Microsoft, and Qualcomm to oppose it.

Matthew Prince uses a lot of hand gestures—he holds his palms out to illustrate an overarching concept, or clenches his fists and grins to show excitement. He also loves multicolor whiteboard illustrations.

Wearing jeans and a plaid shirt, the cofounder and CEO of CloudFlare, an Internet edge service provider (more on what that means later), describes a grand vision of sweeping changes in the Internet infrastructure market, with much of it sliding over to Amazon. From a spare conference room in cramped offices way south of Market Street in San Francisco, Prince talks about how CloudFlare can put a wrench in Amazon’s plan, thanks in part to $110 million in new funding that includes buy-in from some of technology’s biggest players: Google, Microsoft, mobile chipmaker Qualcomm, and Chinese search-engine company Baidu. (Fidelity Investments lead the round.) 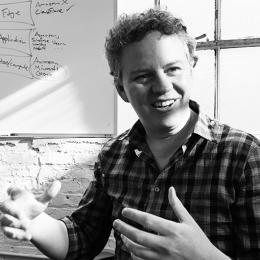 FROM HARDWARE TO SOFTWARE

It isn’t the money Prince really wants to talk about. “I hate fundraising stories,” he says as an opener. He wants to discuss a complete remaking in how companies will use the Internet. The changes Prince predicts would have huge implications for tech giants like Cisco, Dell, Google, HP, Microsoft, Oracle, and the new eight-million-pound gorilla, Amazon. “People prefer to rent services and use them as they need them, as opposed to having to make a big capital outlay that often doesn’t get used,” says Prince.

That explains the rise of Amazon Web Services(AWS) for what Prince calls the “store and compute” layer—one of three layers he sketches out on the conference-room whiteboard. Instead of buying and maintaining their own servers from companies like Dell and HP, businesses are contracting with providers like AWS that rent server capacity on an as-needed basis.

Next comes the applications layer, says Prince, dominated by Microsoft programs, Oracle databases, and SAP business management software, but transitioning to a huge number of specialty cloud providers such as Adobe and Dropbox, Salesforce for customer relations, and Workday for human resources. Here Amazon is offering its Amazon Relational Database Service and pushing its brand-new alternative to Oracle and Microsoft databases, called Aurora, as a “data lake,” says Prince, on which new services can sit.

Finally comes the edge layer, where data moves in and out of a company through its websites, email, chat, e-commerce, and other services. This is where CloudFlare competes by offering rented security and optimization services as alternatives to hardware such as Cisco and Juniper routers and various firewall boxes. Now that a company’s software has moved from its own servers to various cloud providers, says Prince, companies need cloud-based services, rather than hardware, to secure them all. CloudFlare also provides load balancing and a content delivery network to speed up web applications and media delivery. Launched in 2009, the company has more than 2 million customers, with more than 5% of all Internet requests (essentially, page views) flowing through its network.

“Today, if you look at who we compete for dollars with, it’s much more with the Cisco hardware folks,” says Prince. “But in the future, it’s definitely going to be much more with Amazon.” (That said, hardware-based rivals like Cisco are also moving to cloud services.)

“When we were out to do fundraising, it wasn’t us pitching why they should work with us,” says Prince. “It was the opposite, where they would get the word that we were doing something and they were like, you have to include us.” Microsoft, for example, wanted to bundle CloudFlare with its Azure platform, which offers functions such as web applications and databases.

With Baidu, Prince sees the logistical partnership as way more important than the monetary investment. “We figured out how to build infrastructure across mainland China,” he says. The Qualcomm partnership, meanwhile, gets CloudFlare a better toehold in the mobile Internet, which Qualcomm predicts will one day handle 1,000 times more traffic than it does today.

CloudFlare’s quick rise made it one of Fast Company‘s 10 most-innovative web/Internet companies in 2012. CloudFlare became profitable in 2014 and is pouring revenue into expansion (currently opening about one data center location per week) and keeping costs down elsewhere. “You can see how much we spend on our beautiful office spaces,” says Prince, with a chuckle, pointing to the rough brick walls around him. (CloudFlare’s office is moving to a new location soon.) “What’s worked for us so far has been being extremely scrappy,” he says, “and making decisions not based on . . . how do we raise the most money or how do we get the best valuation.”

Read the original article at FastCompany.com